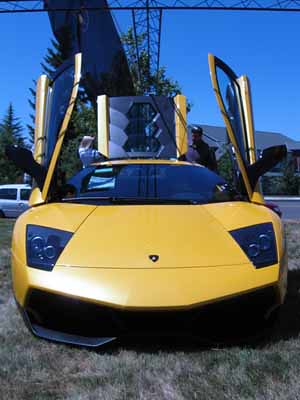 After spending the night at a friend’s house in Eugene (keg of Ninkasi! giant chocolate cupcakes! hot tub!), I stopped by Grand Prix Imports in Wilsonville, Oregon, to see the new Lamborghini Murcielago LP 670-4 SV with its iridescent yellow paint. They had doors and engine hood up, and they even fired up the 12-cylinder behind the seats. I was surprised at the low note of the Super Veloce; the engine was quieter than the color scheme.

I’ll have images up on the Lamborghini Gallardo gallery page of my About.com Exotic Cars site in a sec.